Tell the Breastfeeding Association: Do not cave to woke trans ideology 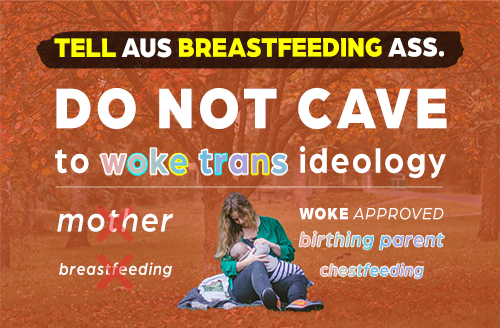 It is extremely concerning to read in the media that mum-of-three Jasmine Sussex was sacked from her volunteer breastfeeding counsellor role for saying the word 'mother' instead of the trans approved term 'parent'.

The DailyMail reported that:

Jasmine Sussex said she lost her role because she 'excessively' used the word mother in social media posts, after the association partnered with Rainbow Families NSW to promote the use of gender neutral language.

Despite what the woke say:

The Australian Breastfeeding Association needs to toss out the woke garbage and stand for biological truth.

Please send a quick message to the ABA urging them to reinstate Jasmine Sussex as a volunteer counsellor and telling them not capitulate to the woke trans agenda.