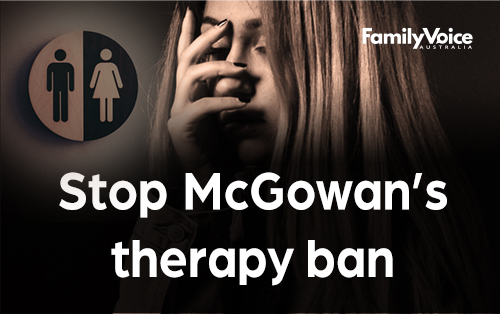 Mark McGowan has promised to ban wait-and-see and trauma-informed counselling for people with unwanted same-sex attraction or gender confusion.

His expected bill will fine, deregister and potentially jail professionals who engage in client-directed counselling to help people seeking to alter their sexual or gender orientation, or who advise clients against radical and harmful chemical intervention.

McGowan’s bill will stop both parents and professionals from seeking their child’s or their client’s best interests.

In May, Stockholm’s Astrid Lindgren children’s gender clinic acted on evidenced fears about legal liability, amid concerns about cancer and irreversible infertility from radical chemical intervention. Both that clinic, and the Perth Children’s Hospital ‘Gender Diversity Service’, have changed policy to require a state court order to head off any legal liability for inflicting long-term damage to a minor.

After the UK Keira Bell court decision against the Tavistock clinic, clinicians want children to have access to trauma-informed therapy, including the “untangling of gender dysphoria from co-morbid factors such as anxiety, depression and sexual abuse,” as explained by five children’s gender clinicians at The Children’s Hospital in Westmead.

In the Perth Children’s Hospital Gender Diversity service, a nine year old was the youngest to start puberty blockers, in 2016. At least 49 are currently on stage 1 blockers. Hormone therapy begins as young as age 15. At least 47 are on this second stage.

Without chemical interventions, 70-98% of boys and 50-88% of girls who are gender-confused eventually accept their biological sex, according to the DSM Manual of Mental Disorders, 5th Edition.

Tell your local MPs to cancel this anti-evidence, anti-freedom legislation.

It’s time to take a stand!