Election integrity must include Voter ID 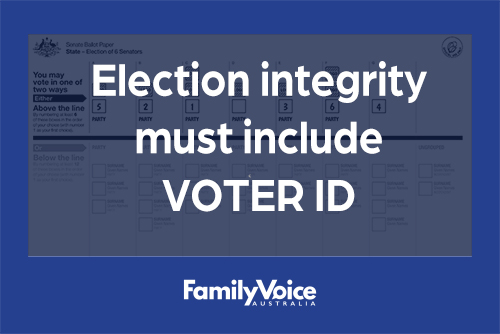 In a rare win for the integrity of democracy, the Commonwealth government has finally agreed to seek a reform of voter identification in federal elections.

Along with only a handful of other groups, FamilyVoice has long campaigned for better integrity in the voting system, and after each federal election, in recent decades, we have urged governments to reform the electoral system, to require voters to show photo identification when casting their ballot.

For example, in a submission to the Commonwealth Parliament, shortly after the 2016 federal election, we urged MPs to reform the electoral procedure as follows:

The integrity of the voting system requires that a person vote only once, and as themselves. It is reasonable to require some personal identification, such as a driver’s licence, rates notice, or electricity or gas account. Banks routinely require some personal identification when making over-the-counter withdrawals and it should be possible for a similar system to be applied by election officials. With such a requirement enforced, it would be very difficult for one person to claim to be someone else and vote as that person. With a requirement to show adequate personal identification in place, a person could only vote multiple times as themselves, and would be identified by existing AEC processes. This should be a priority given the number of individuals apparently voting more than once at the 2016 election ….

Unfortunately, we expect the ALP and the Greens to oppose the move, on the basis of them somehow not wishing to disenfranchise people not having suitable identification. But we have persistently told federal MPs that even homeless people usually have identification, and there can always be provision for a declaration to be made at the polling place, to handle the miniscule number of citizens who truly lack any ID.

The way forward to require voters to produce identification at the polling stations for federal elections is for supporters like you to contact your Senators, urging support for the government’s proposal.