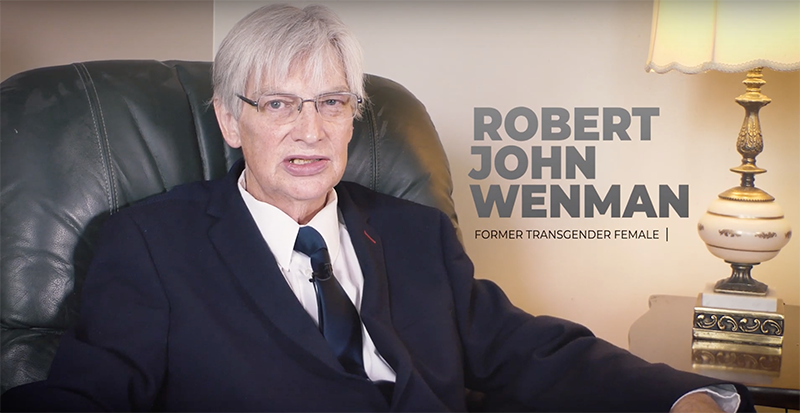 Canadian Robert John Wenman, who has resumed life as a biological male, has urged MPs to reject a ban on therapies designed to help people struggling with gender identity issues.

“I am a man who lived as a woman from 1994 until 2012, and refute the implication that all LGBTQ people are becoming emotionally scarred after undergoing conversion therapy,” said Wenman in a video posted to YouTube.

“I speak from personal life experience countering the assumption that all LGBTQ person's emotional problems stem from a hateful intolerant society. This is simply not the case as I voluntarily went to a fundamental Bible believing Church which I believe saved my life.”

Wenman says LGBTQ people who struggle with mental health issues will be prevented from getting the help they need, if the legislation banning therapy is enacted.

“Earlier in my life I came to believe that pursuing a change of gender would be the fix-all solution for my lifelong deep-rooted emotional problems and inferiority complexes in 1997.

“I had successful sex reassignment surgery and was legally recognised as a woman. I anticipated a new life happily-ever-after, right after the surgery.

“I perceived that I had truly completed my gender change journey and believed that I had closed a chapter my life and resolved all my past emotional issues.”

“I was now in deep depression and searching for help as my complete gender transition had left me emotionally paralysed in a prison of fear with shame and guilt.”

Wenman says professional counseling did not alleviate his severe emotional anxiety and sex reassignment surgery only made his emotional problems worse.

“I remember going to my family doctor and bursting into tears, coming to realize my gender transition was a failure. I was given anti-depressant medication and recommended for counseling. Unfortunately, mental health counseling was of no help; in fact I found myself educating the counselors.

“I was in a very dark place,” Wenman says, as his “emotional turmoil was the byproduct of being in spiritual warfare despite sex reassignment surgery and having attained full legal recognition as a woman.”

He says he learned the hard way the consequences of not living in truth and that there was spiritual warfare against his un-realised spiritual identity that had ripple effects affecting family, friends and acquaintances.

“I became convicted that I must live in truth and therefore changed all my identity back to my given male birth name.  I have learned to be thankful for who I am and what I have, including my birth sex and for God's many blessings.”

Wenman said that he is very concerned about the increasing numbers of young people intending to “change gender” and finished his video by calling on senators to vote against the legislation:

“I sincerely hope that the sharing of my own personal experiences will help you to make the very best decisions for Canadians struggling with gender confusion,” he said.