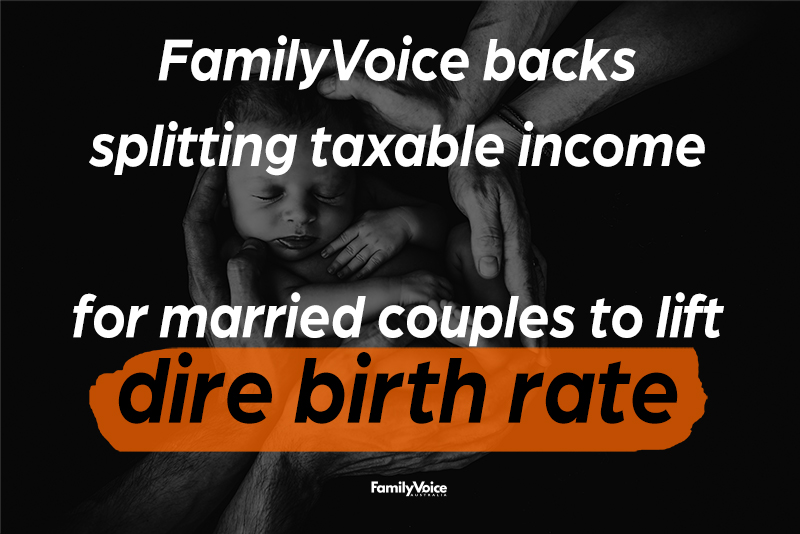 An income-split tax concession for married couples is desperately needed in the 2022 Budget to arrest Australia’s birth rate that has plummeted to 1.58 babies per woman, according to FamilyVoice Australia.

“Letting married parents split their taxable income, to boost their ability to have children, is a fair and equitable reward for couples who have chosen the long-term stability of marriage,” said FamilyVoice spokesperson Darryl Budge.

“Recent spending has seen billions directly boost the profits of childcare centres, and our birth rate has continued to decline.

“Direct spending to parents has had a positive effect. The baby bonus and concessions introduced in 2004 by then Treasurer Peter Costello temporarily lifted Australia’s birth rate to 2.0 for a short period in 2008,” said FamilyVoice spokesperson Darryl Budge.

“Budget 2022 is a timely chance to establish the long-term measure of taxable-income splitting for committed parents, after the economic destabilisation caused by covid restrictions.

“Victoria has a dire fertility rate of just 1.43 babies per woman, which is arguably due to the extraordinary high cost of living in that state.

“Babies are precious and they are the future of our nation’s workforce and economic balance.

“In just 10 years our median population age will be 40, double what it was in the 1970s when the median household had three children.

“As a nation we must reverse this course that is crushing our citizens, as it is crushing our future as well. Australia has descended from a peak of over 3 children per childbearing-age woman to this record low of 1.58.

“We are headed for a demographic winter, a rapidly aging population, unless our nation’s culture and laws embraces and protects unborn children again – and allows pressured and distressed women to freely seek help, while fleeing pressure or abuse, no matter where they are in Australia.

“We are on a trajectory to meet China and Italy at their low 1.3, half of what a self-sustaining country needs.”