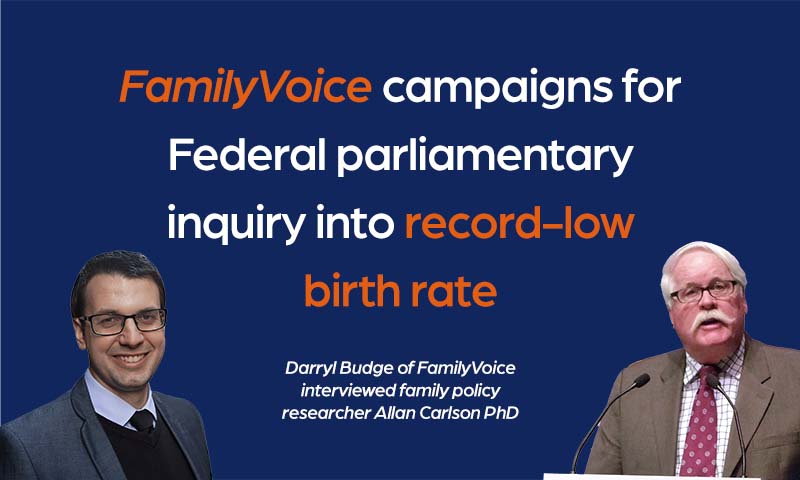 Proven pro-baby policies to address Australia’s rapidly ageing population must be addressed via a parliamentary committee, according to pro-family lobby group FamilyVoice Australia.

“Rapid shocks like a doubling of Australia’s skilled migrant intake will destabilise our mismanaged hospital systems, but boosting our birth rate is the sustainable path,” said FamilyVoice spokesman Darryl Budge.

Allan C. Carlson PhD, the founder of the World Congress of Families, which began in 1997, was also appointed by President Ronald Reagan in 1988 to the special National Commission on Children. He has authored 15 books.

The video transcript is attached. Allan Carlson provided the following supporting arguments for his five points to reverse fertility decline:

“To eliminate from consideration of income taxation any relationships, be that marriage or parenting, has been a complete disaster.”

“Income splitting was law in the United States from 1938 to 1968, and in a number of European countries.”

“It doubled the tax brackets in a progressive tax system for married couples compared to single persons. It was a tremendous financial incentive for marriage and to the preservation of marriage.”

“A mother at home became a tax shelter, as we would say, in the United States, and it was a powerful one. It supported and recognized the work and value of the parent at home, raising children.”

“A family raising three or four or five children should basically be relieved of taxation through a per capita child deduction. While their children are young and growing and while they're in the home, that's what I favour.”

“One of the great demographers of the 20th century was an Australian named John C Caldwell. His book, Theory of Fertility Decline, I think, is one of the best books ever written on the problem.

Caldwall “states very clearly and again, the book "A theory of fertility decline", 1982, is that the state is in competition with families for, we will say, control or at least influence over the children. And he says this systematic effort of state public school systems is to undermine family what he calls the family morality system's inherited from a religious and traditionalist perspective. I think he's entirely right on. His numbers hold up really, really, really well. These studies have been done in the United States looking at the Caldwell thesis. The spread of public states' schooling correlates almost perfectly with declining fertility in the United States.”

“The return of the educational function to the home, I think, is a hugely important development. And so I guess my third recommendation would be to favour alternatives to state schooling, also to promote and support one way or the other religious schools.”

“In the United States there have been good studies (showing) home-schooling families are two to three times larger than families that send their children to public schools. Well, what's is cause and effect there? You can see it kicked out around a lot, but home-schooling reinforces high fertility.”

“There have been careful econometric studies showing over time there is a direct and inverse correlation between the size and the generosity of a public welfare and public pension system and fertility.”

The pay-as-you-go social insurance system “only works if there are children going to be there in the future tax to pay for you. The incentive is to have no children”, since the couple with no children gets the same pension.

Dr Carlson suggested reducing payroll tax “by 25% for each child born. The investment of the child is more important than the modest contribution.”

“Extreme gender theory is a hugely anti-natalist intellectual influence. It ignores biological realities and the pursuit of what I would consider quite incoherent individual desires and so on.”