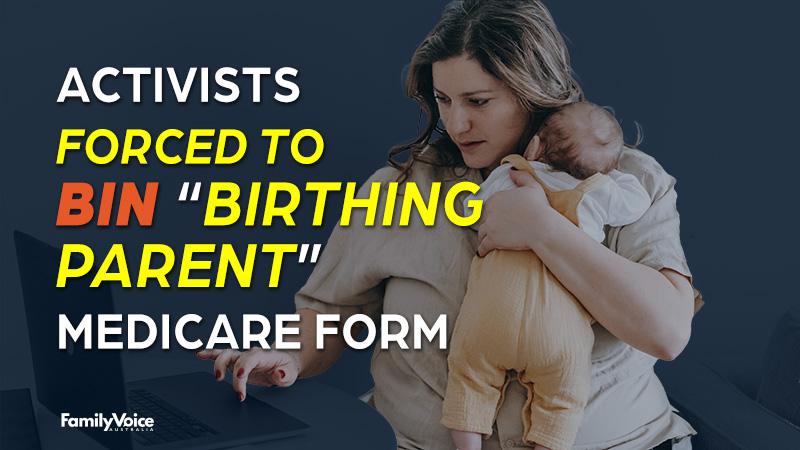 FamilyVoice has been vindicated by its stance earlier this year against the term ‘birthing parent’ which belittles mums, and highlights the fact that biological reality was being lost.

Services Australia, the federal agency responsible for the forms, said the “birthing parent” language was being reviewed as part of a pilot digital registration process for Medicare.

“The term ‘birthing parent’ is being used in a consent form provided to parents participating in the Birth of a Child pilot,” Services Australia general manager Hank Jongen said.

Mr Jongen drew attention to the reality that new mother Sall Grover, with her new baby Isabelle, is “not happy” about signing a government form calling her a “Birthing Parent” instead of mother.”

However, the Services Australia chief did not say whether current feedback from the general public received support for the department’s move.

Greg Bondar said, “In the age of identity politics, gender-neutral language is undermining biological facts with terms like ‘birthing parent’ and ‘person who bleeds’ being substituted for ‘mother’ and ‘woman’.

“In the drive to recognise all gender identities, biological reality is being lost – and anyone who stands up to it is harassed, abused, and cancelled.

“The real issue is that in changing the meaning of the word ‘woman’ we are making ‘woman’ into an open category – one that anyone can join which is just not reality.

“If hospitals and Medicare call a mother a ‘birthing parent’, they are saying that not everyone who gives birth is a woman – really? That’s denying biology.

“We need to go back to basics: when we say ‘women’, we mean the biological and dictionary definition of ‘women’ – female adult humans. Since when does ‘identity’ come before biology?”, added Bondar.