Tell Scott Morrison to Save Democracy 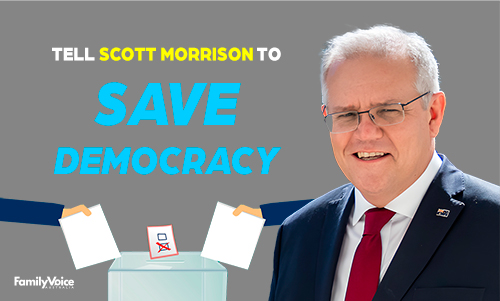 People who have joined a major political party hoping to have their say on who gets pre-selected are having their democratic rights taken away from them.

The reason people join a political party is to have a say on policy and who gets pre-selected to hopefully win the seat.

Why would people join a political party if their democratic rights are taken away from them?

The NSW state executive of the Liberal party would bypass pre-selections and endorse candidates for almost every outstanding seat, after factional power brokers stitched together a last-minute deal.

How about if we cancel the federal election and just get the governor general to appoint a few of his buddies to run the country? This would not be good enough. Democracy must be respected.

Australian democracy is being threatened by these tactics to by-pass ordinary Australians. This must be stopped.