Hands Off the Lord’s Prayer 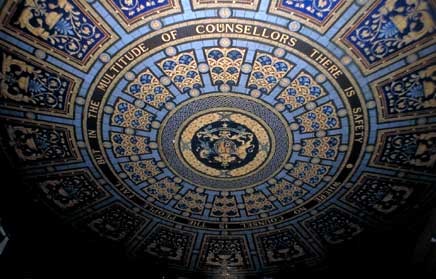 At present, the prayer is read at the beginning of each parliamentary sitting day and has been for more than 100 years.

The floor of Parliament’s foyer is embedded with Scripture – “Where no counsel is, the people fall: But in the multitude of counsellors there is safety” (Proverbs 11:14). Victoria’s prosperity and growth was built on a foundation of hard work, courage, and character - but also on faith.

“Counsel” refers to a helmsman or pilot – the steady hand guiding the Victorian “ship.” Elected representatives were seen to epitomize admirable human qualities and wisdom, but to recognise a power greater than their own. This respect for a heavenly ‘Father’ (whom Christians know as Yahwey, or Jehovah) tempered, inspired and constrained their thoughts and decisions.

The Lord’s Prayer is a recognition of a greater power: Almighty God, his goodness, and role as the source of provision, forgiveness, holiness and salvation.

Most Australians are people of faith. Today, a few leaders like Fiona Patten want to forget history and deny the role of faith as integral to our success.

Another proverb says, “Where there is no revelation, the people cast off restraint; But happy is he who keeps the law” (Proverbs 29:18). Ms Patten’s woke policies and ambitions would see Victoria floundering like a ship without an anchor in a storm.

We are seeing great Australian vision, courage and character rewarded in the Tokyo Olympics, but back home the Reason Party can see no further than its own destructive, selfish, and petty ideology.

We don’t want history and tradition cancelled through one MP’s ambition. Please tell your MPs to vote against Ms Patten’s motion and keep the opening of the Victorian Parliament unchanged.

Please send a short email to your state MPs asking them to act.