People who live in the Australian Capital Territory will choose their next government on Saturday 17 October.

Even if you don’t live there, you may be interested in our new FamilyVoice Vote Wisely leaflet. You may be able to forward it to friends or relatives who do.

We have focused on the two major parties, because one of them – either Labor or Liberal – will form government after the election. Their current policies and past voting records indicate key differences on issues affecting families, faith and freedom in the ACT:

I have included the image of the ACT Vote Wisely leaflet below. You can also access it on our website. 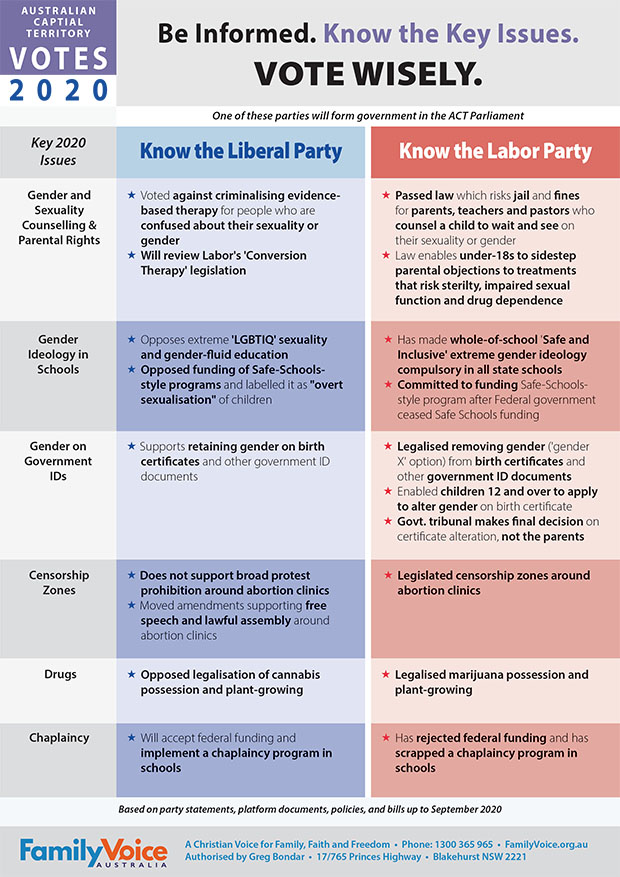 Last year our Vote Wisely leaflet made a big impact on the federal election on 19 May 2019. Many people thanked us for telling them about policies the mainstream media rarely report.

Some people posted the leaflet on Facebook and other social media. Others placed the leaflet in their local newspaper as an advertisement.

Please pray that one way or another, many people in the ACT may consider the information below.

The work needed to prepare and produce this Vote Wisely leaflet is expensive.  It involves our staff spending many hours researching the policies of the Labor and Liberal parties on these important issues.  We greatly value your financial support that enables this work to be done.  If you are able, a donation at this time would be greatly appreciated.