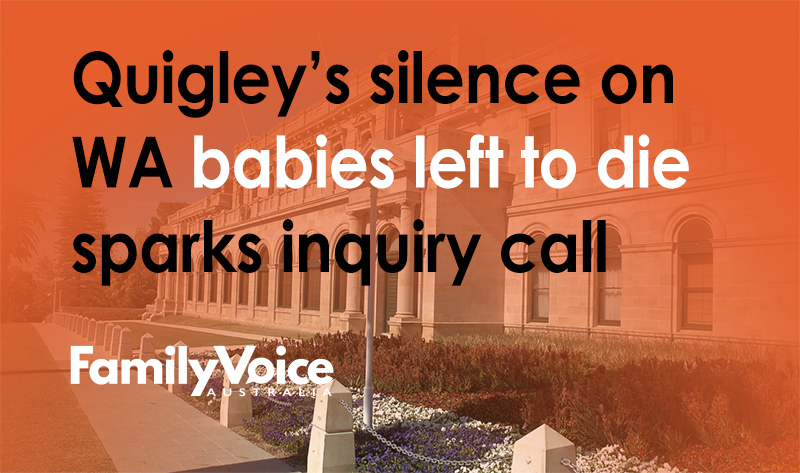 Government silence on 25 born-alive babies left to die after an abortion procedure in Western Australia should alarm every WA political party into calling for a parliamentary inquiry, according to FamilyVoice Australia.

“The WA Coroner made legal recommendations on WA babies left to die after an abortion procedure to the Attorney General John Quigley in January 2020, but nearly a year later Mr Quigley has still not disclosed any of them, or what the Government’s response is,” said FamilyVoice WA Director Darryl Budge.

“Every WA party and candidate who declares that they protect human lives from deadly illnesses must surely rise to ensure defenceless children have not been illegally or improperly treated during or after their birth.

“Queensland MP George Christensen has rightly pointed out that Australia’s laws are in breach of two international agreements to which it is a signatory: The Convention on the Rights of the Child, and the International Covenant on Civil and Political Rights.

“FamilyVoice therefore calls on political parties across Australia to explain on what grounds anyone could not support the principles behind his Human Rights (Children Born Alive Protection) Act 2021 bill.”

The Victorian Health Department reported in 2016 that 33 babies were born alive and then died after surviving an abortion procedure. In 2012 and 2014, the numbers were 53 and 38 respectively.

The WA Health Department has previously published the existence of 27 born-alive babies but revised the figure down to 25 after subsequent investigation of medical records.

“Why has the Attorney General John Quigley and the Health Department not taken any practical or legal action to protect infants born alive, and ensure they are not abandoned and given the maximum care possible?

“Every one of these babies that was expected to die defied all odds and survived induced premature deliveries, yet they were left to die.

“It is beyond time for all political parties and candidates declare their support for an inquiry. Silence on the need to bolster care for defenceless babies is not a legitimate option.

“According to WA Health Department data, there is no record of medical intervention or resuscitation being undertaken in any of the 25 cases.”

According to South Australian Attorney General’s office, a baby that survives an abortion “is wrapped in a blanket and the mother is given the opportunity to hold the baby as it dies.”