Your preferences matter on Election Day!

In any election, every vote counts – but some count more than others. Your preferences are critical! Make sure your vote counts.

The final, critical Upper House seats in the NSW State election were decided by the failure of moderate and conservative voters to preference wisely. Preferences made all the difference.

Antony Green tweeted about the NSW Election: “The flood of preferences to Animal Justice Party and failure of flow from the right cost the Christian Democrats the last seat.” 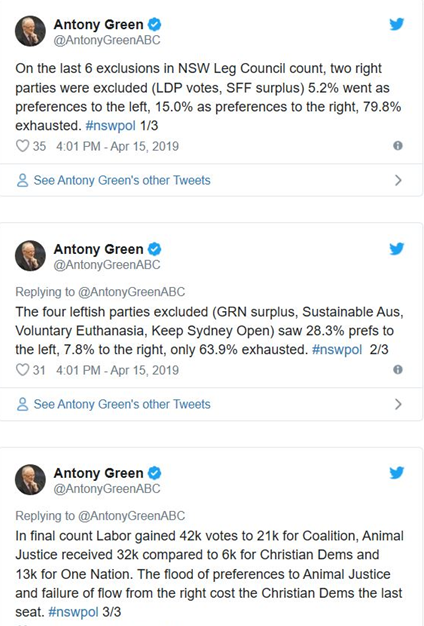 But there is something more important… It can take generations to undo the damage to children caused by the political influences in the education sector.

Families will never recover from the loss of children because of the abortion ideology that the unborn are not human and have no rights.

Freedom of speech and religion are the lamps that lights society and if we let them go out it may take generations to light them again.

Seats may be decided upon a handful of votes. Your vote must count and the only way you can be sure is to preference wisely and completely.

Remember Antony Green’s comment regarding the NSW Election:  “The flood of preferences to Animal Justice Party and failure of flow from the right cost the Christian Democrats the last seat.”

The number of parties listed above the line has grown considerably – except in NT and ACT. If you know what all the parties stand for then preference below the line – at least 80% but preferably all.

If this is too complicated, then vote above the line, preference all parties not just 6 – putting the parties with known Christian or family values first and those extreme social policies last.

Bernard Gaynor observed that the failure of preference flows from the political right in NSW was in part the result of 16,036 Australian Conservative voters failing to preference any other party. Had they preferenced the CDP, the CDP would have won the last seat in place of the Animal Justice Party.

Our How to vote in the Senate lists pro-life candidates to pray for.