Bernard Gaynor and the fight for free speech 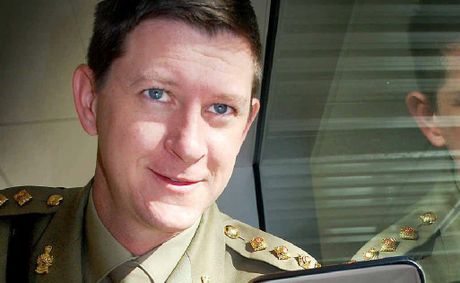 You may have been among the many who watched our FamilyVoice webinar with Bernard Gaynor, hosted by Greg Bondar and David d’Lima on 21 September.

He is a committed Christian and conservative Catholic who has more courage than most of us. Speaking up for the values Aussie soldiers fought for in two world wars has cost him his Army Reserve job and his house, but he has not given up.

Bernard served fulltime in the Australian Army from 1999 to 2012, when he joined the Army Reserve with the rank of Major.

He was deployed three times to Iraq, where he worked in military intelligence using his extensive knowledge of Arabic language and culture. He was awarded the United States Meritorious Service Medal for his Iraq service.

He is also a married father of eight children. He is an advocate for:

One of the first things Bernard did during the September webinar was to express his appreciation for FamilyVoice Australia, who stood by him during his trials and persecution that began in 2013.

“FamilyVoice is one of the few conservative associations in Australia to publicly support me,” he said.

“What has been happening in this country – the home of the ANZACs – is insane. It is madness, spiralling out of control, to think that people are being dragged into court merely for opposing same-sex marriage.

“But I bring a message of hope,” he said. “God exists and God is good. There is deep happiness that comes from helping others to do the right thing. Never lose hope that God and goodness will prevail.

“Bernard Gaynor is weak. If it were up to me, I would have fallen at the first hurdle. But like the Apostle Paul, I glory in my weakness because it shows God’s power,” he said.

This short video of Bernard and his wife Elle was filmed in 2017, before the postal vote on same-sex marriage. It explains why Bernard, a respected member of the Australian Defence Force, had been sacked. Not because he was incompetent – he had performed well. Not for breaching orders, policies or disciplinary requirements – he had at all times acted respectfully with other members of the Defence Force.

But a letter from the Chief of the Defence Force informed him that despite his excellent service, he was being dismissed from the Army because of his views on marriage and family. Even though they were expressed in Bernard’s own time and in a private capacity, his views – including how he wanted his children educated – were “contrary to cultural change within the Defence Force”.

“I had expressed concern that Defence had marched publicly in the Gay Mardi Gras,” Bernard said, “along with groups campaigning for same-sex marriage.

“I pointed out that this was contrary to orders prohibiting uniformed attendance at events of a political nature, and policies against religious vilification. That’s why I was sacked.

“Along the way, I was told I could not even speak about things like the Safe Schools program.”

Bernard’s dismissal was only the beginning of his troubles. Despite living in Brisbane, he has been the subject of no fewer than 37 complaints by Sydney homosexual activist Garry Burns.

No complaint has been substantiated, but the cost of proving his innocence meant he had to sell his home in 2017 to pay for $500,000 in legal bills.

The High Court found that the NSW Anti-Discrimination Board had no power to deal with complaints against people from interstate – whereupon the NSW government promptly changed the law.

Bernard will need to go back to the High Court, but the good news is that Garry Burns is now bankrupt. Moreover, NSW One Nation MP Mark Latham – former federal Labor leader – has defended Bernard in the NSW parliament.

Bernard is grateful for the prayers and financial help he has received from many Christians and others who support freedom of speech.

You can find out more about him on his website.

Above all, he would value your prayers.